Disintegration in a flexible pavement is typically caused by climate, insufficient compaction of the surface, insufficient asphalt binder in the mix, loss of adhesion between the asphalt coating and aggregate particles, or severe overheating of the mix. The following types of disintegration commonly occur.

Raveling is the wearing away of the pavement surface caused by the dislodging of aggregate particles. This distress may indicate that the asphalt binder has aged and hardened significantly. As the raveling continues, larger pieces break free, and the pavement takes on a rough and jagged appearance which can produce a significant source for FOD.

Longitudinal cracks may result from shrinkage or contraction of the HMA surface. Shrinkage of the surface material is caused by oxidation and age hardening of the asphalt material. Contraction is caused by thermal fluctuations. Poorly constructed paving lane joints may accelerate the development of longitudinal joint cracks. This type of cracking is not load associated. 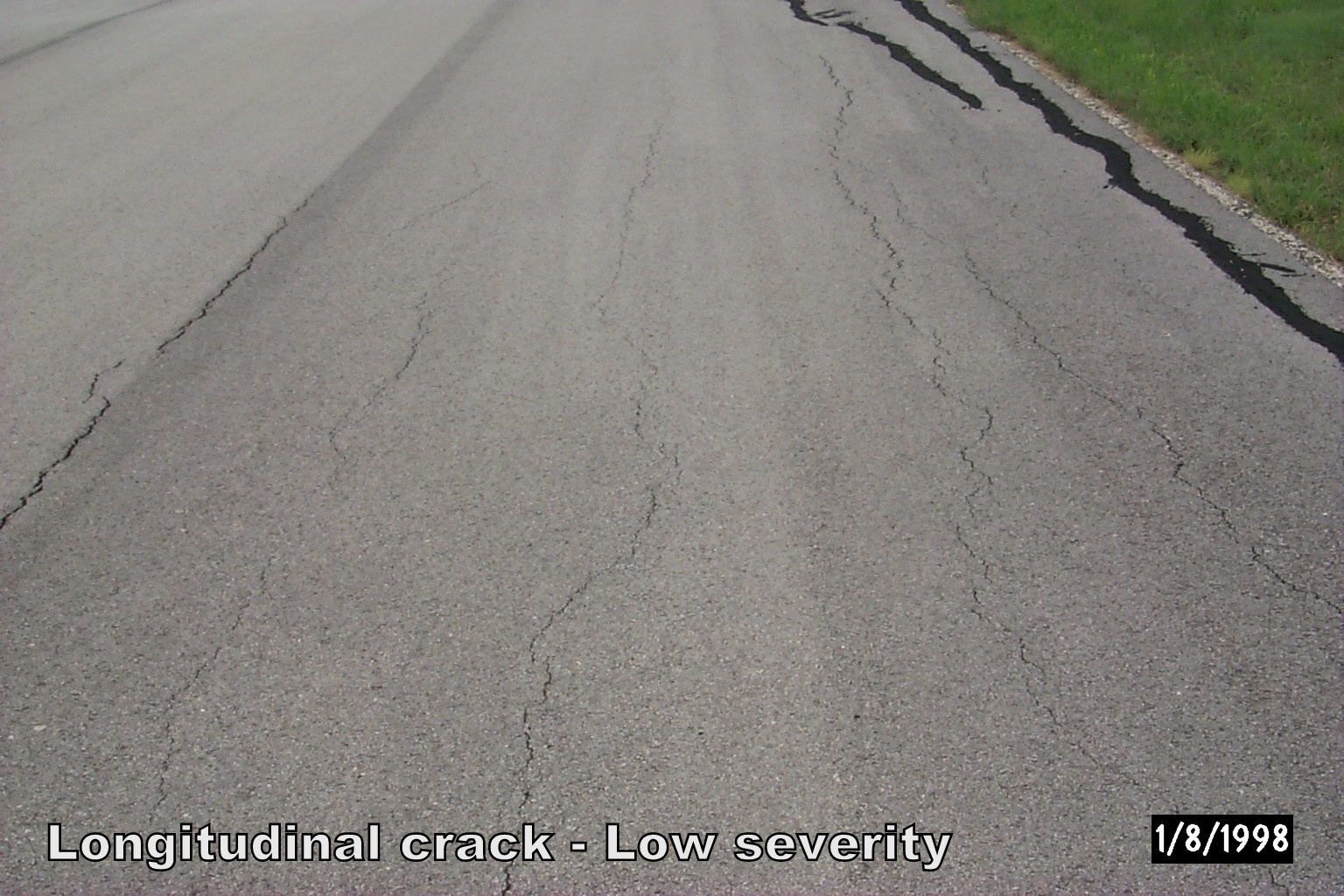 Transverse cracks may result from shrinkage or contraction of the HMA surface. Shrinkage of the surface material is caused by oxidation and age hardening of the asphalt material. Contraction is caused by thermal fluctuations. 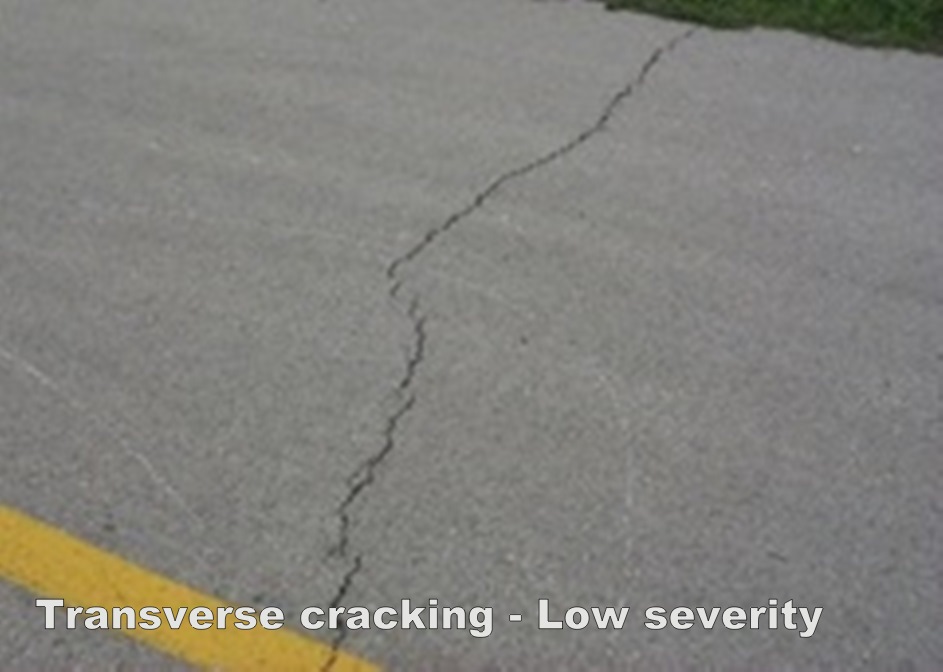 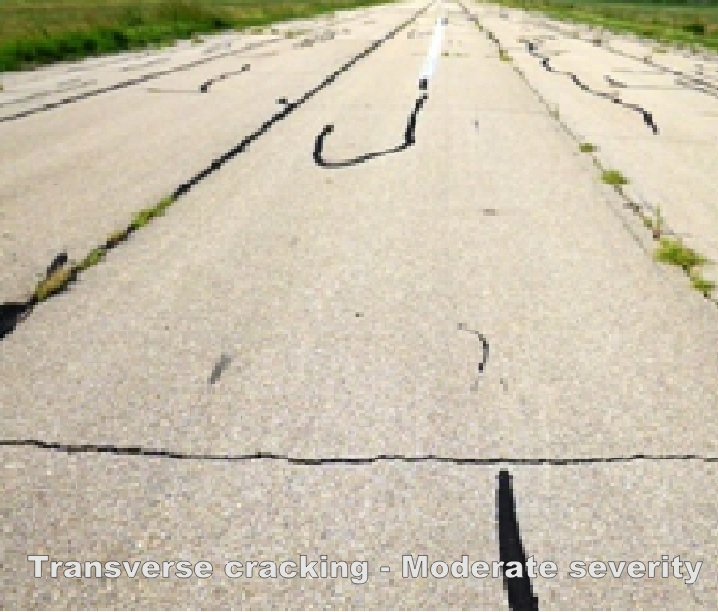 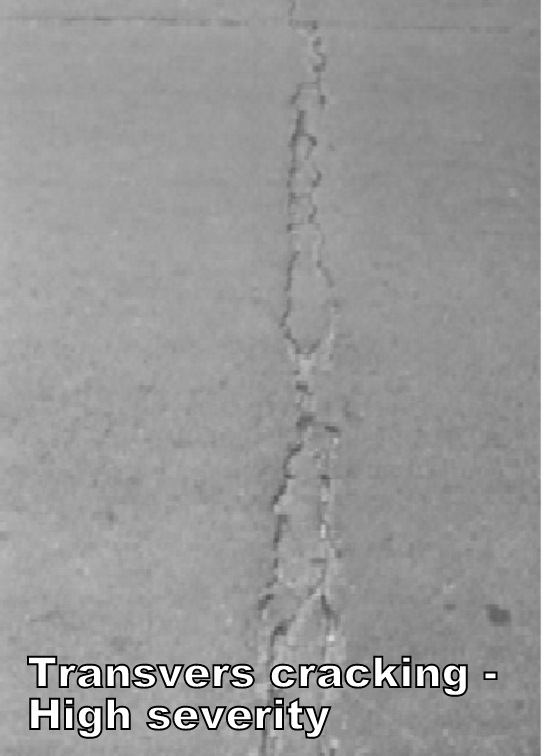 Block cracks are interconnected cracks that divide the pavement into approximately rectangular pieces. The blocks may range in size from approximately 1 foot by 1 foot (0.3 m by 0.3 m) to 10 feet by 10 feet (3 m by 3 m). Block cracking is caused mainly by contraction of the asphalt and daily temperature cycling that results in daily stress/strain cycling. It is not load associated. The occurrence of block cracking usually indicates that the asphalt has hardened significantly. Block cracking normally occurs over a large portion of pavement area, but sometimes will occur only in non-traffic areas. Block cracking differs from alligator cracking. 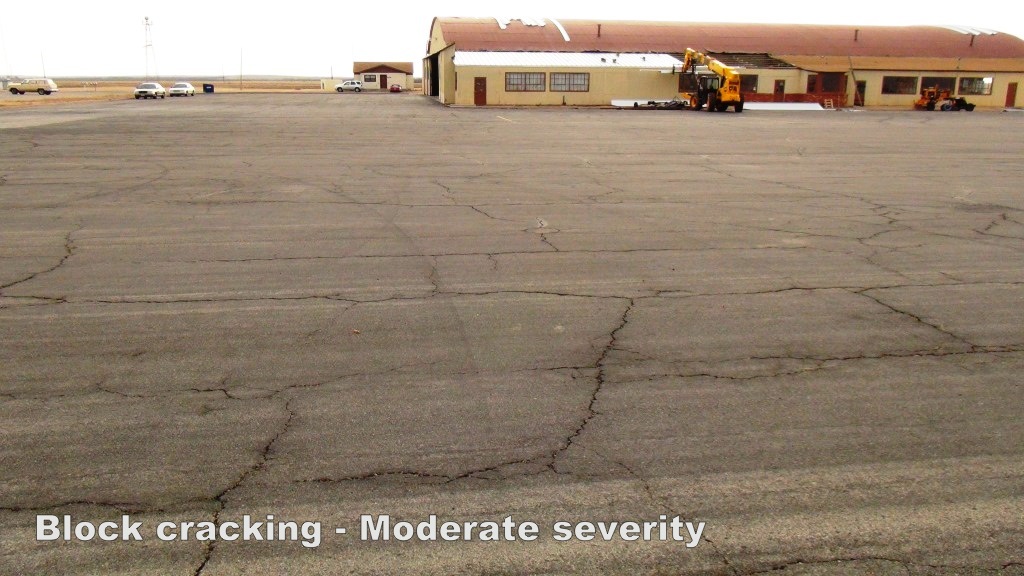 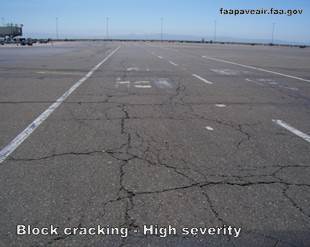 Vertical or horizontal movement in the pavement beneath an overlay cause this type of distress. This movement may be due to expansion and contraction caused by temperature and moisture changes or traffic loads. The cracks in HMA overlays reflect the crack pattern or joint pattern in the underlying pavement. They occur most frequently in HMA overlays on PCC pavements. However, they may also occur on overlays of HMA pavements when cracks or joints in the old pavement have not been properly repaired.

Alligator (fatigue) cracking is a series of interconnecting cracks caused by fatigue failure of the HMA surface under repeated traffic loading. The cracking begins at the bottom of the HMA surface (or stabilized base) where tensile stress and strain are highest under a wheel load. The cracks propagate to the surface initially as a series of parallel cracks. After repeated traffic loading or excessive deflection of the HMA surface over a weakened or under-designed foundation or interlayer, the cracks connect, forming many sided sharp angled pieces that develop a pattern resembling chicken wire or alligator skin. The pieces are less than 2 feet (0.6 m) on the longest side. 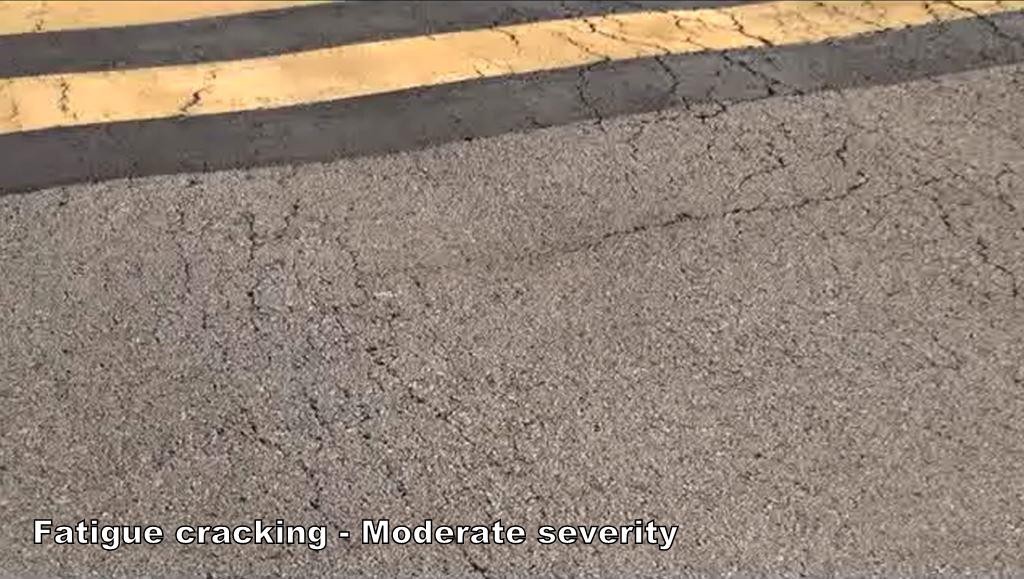 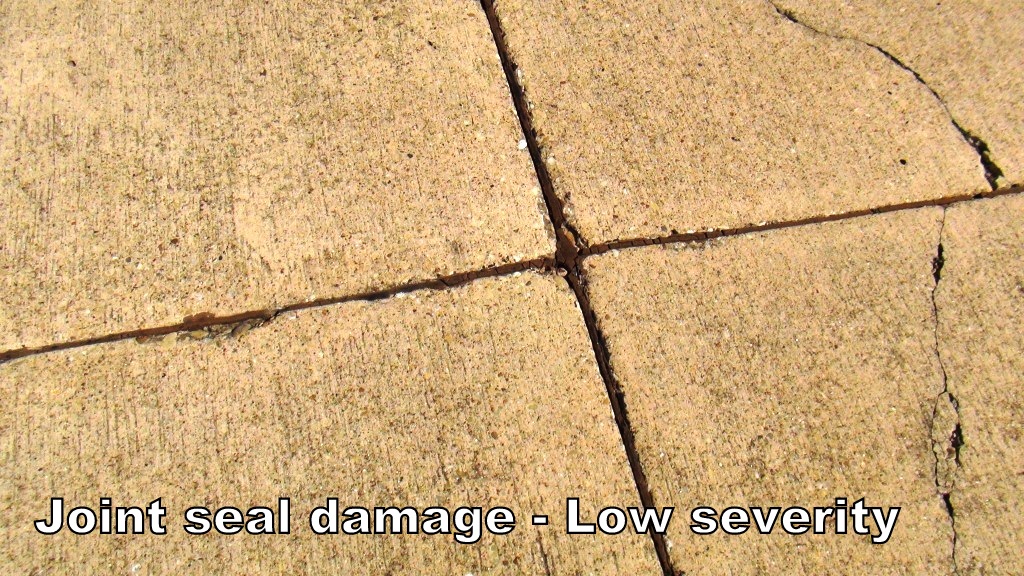 Joint spalling is the breakdown of the slab edges within 2 feet (0.6 m) of the side of the joint. A joint spall usually does not extend vertically through the slab but intersects the joint at an angle. Joint spalling often results from excessive stresses at the joint or crack caused by infiltration of incompressible materials or weak concrete at the joint (caused by overworking) combined with traffic loads. Joint spalling also results when dowels, which prevent slab movement, become misaligned either through improper placement or improper slippage preparation.

Corner spalling is the raveling or breakdown of the slab within approximately 2 feet (0.6 m) of the corner. It differs from a corner break in that the spall usually angles downward to intersect the joint, while a break extends vertically through the slab. The same mechanisms that cause joint spalling often cause corner spalling, but this type of distress may appear sooner because of increased exposure. 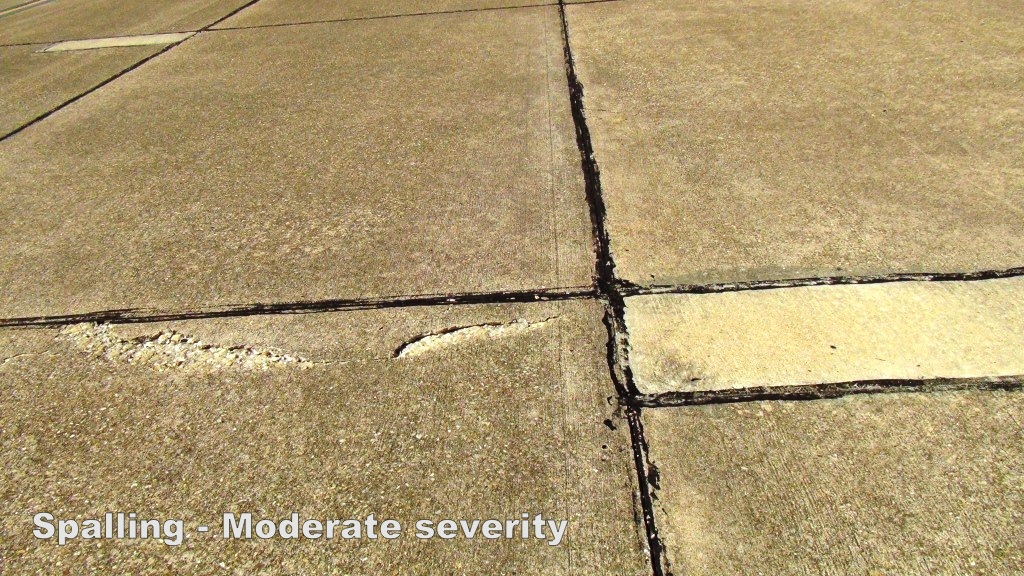 Cracks in rigid pavements often result from stresses caused by expansion and contraction or warping of the pavement. Overloading, loss of subgrade support, and insufficient and/or improperly cut joints acting singly or in combination are also possible causes. The following types of cracking typically occur in rigid pavements.

Load repetition, combined with loss of support and curling stresses, usually causes cracks at the slab corner. The lack of support may be caused by pumping or loss of load transfer at the joint. Corner breaks are characterized by a crack that intersects the joints at a distance less than or equal to one-half of the slab length on both sides, measured from the corner of the slab. A corner break differs from a corner spall in that the break extends vertically through the entire slab thickness; a corner spall intersects the joint at an angle. 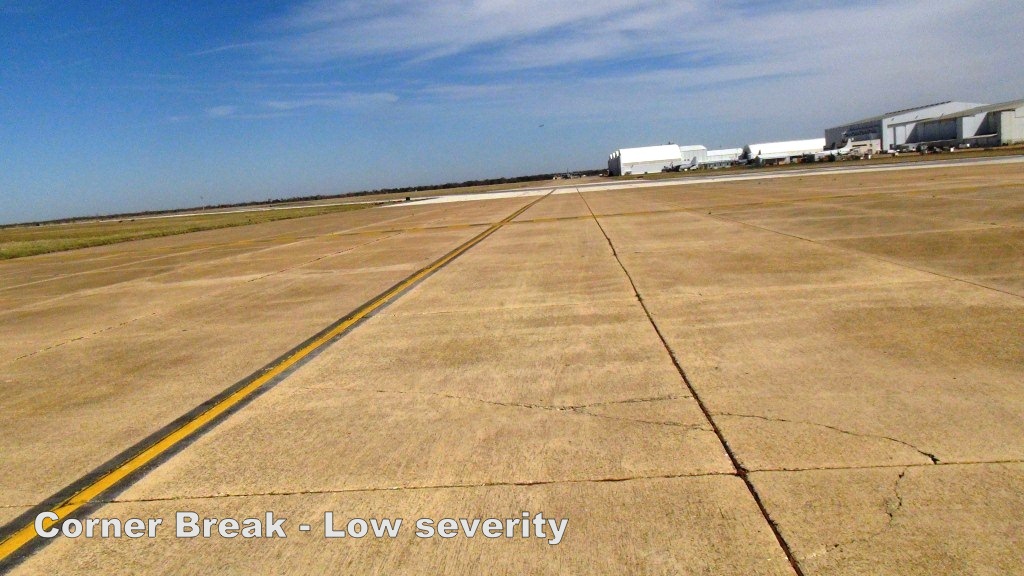 A shattered slab is defined as a slab where intersecting cracks break up the slab into four or more pieces. This is primarily caused by overloading due to traffic and/or inadequate foundation support.